In March 2020 Cheltenham RFC was saddened to hear of the death of a much respected and valued member of the club. Mr John “WOODY” Woodward passed away at Cheltenham General Hospital aged 72 due to a stroke on 6th March. In his 40 years as a member of the club John or “Woody” as he preferred to be known as a keen scrum-half, then moved on to manage the Colt/Junior sides through the 1980s and 1990s. In his time with the Colts he encouraged many of the youngsters in their rugby careers and in more recent years he became the very knowledgeable Cheltenham Rugby Club historian.

The plan was to hold a celebration of Woody’s life at Cheltenham Rugby Club when lockdown restrictions were eased and that day finally arrived on 20th August 2021. People came from near and far to remember Woody with lots of memories and tales of their time of knowing him through work and rugby. And the number of former colts who turned up would have made him proud.

In a packed clubhouse, the President Mr David Townsend paid a fitting and humorous eulogy as follows. 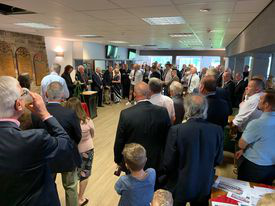 From the shores of Aberystwyth to the lower slopes of Harp hill in Battledown, to the Scottish borders and the valleys of South Wales, to the cities and towns of Great Britain where one can always find a set of rugby posts, to the Caribbean where a cricket square is always present and to his beloved South Africa. Woody had been there and in his own way, and in his own style, he left his mark.

Nine children in the family …. Jean, Janet, David, Douglas, Derek, Denis, Alec, John and Allen …. Originally in Fairview and then Humber Road, Cheltenham. He attended Holy Trinity junior school in Fairview (200 yds from the rear of the Athletic Ground). Woody’s schoolboy pleasures were comics and the cinema: The Hotspur, Roy of the Rovers, the Dandy, the Beano, the Eagle.  Pictures were at the Gaumont, Regal, Coliseum, Ritz, and the Daffodil. By now living in All Saints Road, 500 yards from the Gaumont so, it was then every Saturday morning to “kiddies club”. I think some of us here today, can even remember the song we were encouraged as kids to sing along to!! He then went to Cheltenham Grammar school. Of course at the Grammar school, he was introduced to rugby football – his hero was Lityd Pearce (Sports master) who played for Cheltenham and the county – he encouraged Woody to join Cheltenham.

Before he joined Walker Crossweller and with their permission – Woody joined the Voluntary Service Overseas (VSO) – its aim was to give educational and physical experiences outside of the normal environment. Woody spent a few months in a remote village in the West Indies helping to build a school. On his return, he joined Walker Crossweller as an apprentice engineer finally delivering quality control to the products being produced. He was eventually medically retired (arthritis and two new hip joints) in place.

Woody loved his procedures and processes – he loved the detail. Not for him texts, email, Facebook, WhatsApp etc – he was a pen and paper man supplemented by 2nd class stamps. He alone kept the Post office alive and running in the lower high street. He had the most impressive handwriting I have ever seen. So to the end, he refused to give in to social media … that’s our Woody !!!

At Walker Crossweller you would hear Where is Woody ??? – “on the shop floor with his clipboard” … yes of course he was, but on the clipboard was the colts selection for the forthcoming Saturday / being progressed with telephone calls as he walked around the factory. Where is Woody ? “on his way to Kingsditch” of course he was, after calling into the dry cleaners to pick up his clean blazer.

Woody was an excellent rugby player (a scrum-half) he played for the National Boys Club of England, Cheltenham and the Old Patesians, He formed the Colts Old Boys with Mike Edwards, now proudly known as Cheltenham Saracens. His winter schedule always embraced Rugby Football, no matter who or where he would be on that touchline giving his advice to all who would listen. During the summer months, on many a Saturday afternoon, he visited Cheltenham Cricket Club at the Victoria Ground. Indeed, at one time he was chairman of St Phillips C.C. and of course he always had his table at the Old Pats tent at the Cheltenham cricket festival.

But for many here today his name will always be associated with Cheltenham Colts. Formed by Pat Todd and Norman Reece it was the latter gentleman who was to be Woody’s mentor. Indeed when Norman was housebound it was Woody who took him for rides around the Cotswolds reminiscing about the “good old days”.

The advice, friendship, management techniques, discipline and operational delivery passed onto Woody supported by Mike Edwards, was always present and second to none. No matter where we were, or who we were playing, we had our standards and reputation to maintain, that was built and sustained over many years, and nobody was going to let it down. He taught us all that, and to this day if you look around this congregation, you can see the guys who did it and are proud to be associated with Woody.

There are just too many names to mention, from coaches, managers, players supporters and friends who through their involvement with Woody will all have something to thank him for, and remember him by Perhaps it’s just a story, an experience. one of his jokes, above all we loved and respected that man. 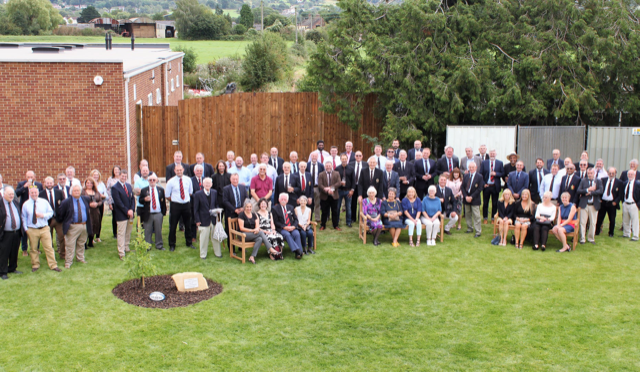 I would ask for your patience as we can all share all our memories and stories at the rugby club after this ceremony. He would like that. There is no doubt we are extremely proud of what he and we achieved. You cant change history!!

So, in these latter years, it was appropriate that Woody became Cheltenham RFC historian – as you would expect he has maintained immaculate and detailed records and passed on that information to many who have requested it. Obviously, his communication was by a landline phone call and/or a letter!!

Woody was one of a kind, courteous, friendly, disciplined, warm, funny, supportive at all times, a good listener and always up for a debate. Oh yes, he loved his food especially curry and an Irish coffee on a Saturday evening !!!

On hearing of his passing the past President of New Zealand Rugby Union (Mr Ian MacRae) sent an email to Steve Ratcliffe on 6 March 2020. “Steve, I received this very sad news this morning. Marilyn would have been very sad too. My condolences to the club – regards Ian”

To: Roger Sainsbury and Simon Betteridge and the 30 plus visitors at Woody’s hospital bed – I thank you for all the love and attention you gave to Woody in his final days.

John Woodward was a legend, he did so much, for so many and he touched all our lives.

After a short service out on the newly created memorial garden, Woody’s ashes were placed in the ground by his brother Derek at the base of an oak sapling watched by the many who were present. 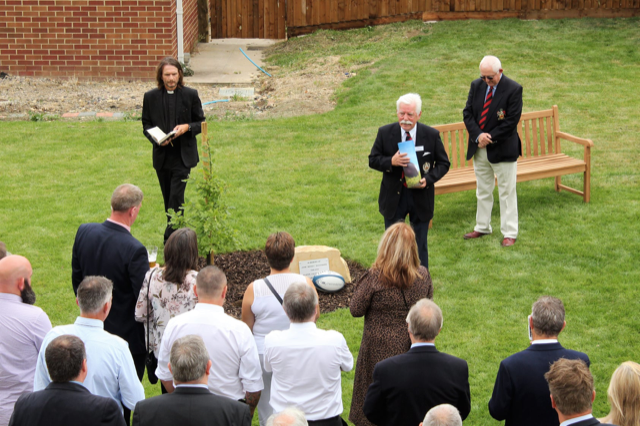 After the formalities of the afternoon, it was back into the clubhouse for more stories and memories of Woody and a rendition of “Allez Allez” (to the tune of From the shores) sung by the former Colts.

The final word after a day that did Woody proud goes to his brother Derek.

“It was a great shock to my family when Woody (John) died caused by blocked arteries (bad diet). At the time the Covid epidemic was starting to expand, things went very quickly from “Could a big enough church be found” to “No mourners allowed in the Chapel” very sad. Over a year later and still Covid raged, I know that time often fades the memory, I began to think that Woody’s memorial day would never take place. The Rugby club has kept the family informed and been very supportive helping to clear Woody’s effects, taking over 75 heavy files containing the club’s history to The Newlands & lots more.

It was wonderful for me and my family that on a sunny day in August the Rugby club had at last been able to put on a day of remembrance. Would many be there on a working Friday? No worries the Club House was packed, many Blazers, ties & badges were on view including a large variety of CRFC badges from different eras. I even spotted badges from The Gloucester Referees, Saracens & Cheltenham North along with many Colt’s badges …. what a turnout.

I had been asked to spread Woody’s ashes under an Oak tree which filled me full of trepidation I didn’t want ashes blown everywhere. The way it had been organised was lovely I was to lower a large tube casket into the soil in front of an Oak sapling. The ashes would be covered by a Cotswold stone memorial at a later date to protect them from disturbance. When the Oak tree matures it will be a fitting memory. Woody’s name was all over the Club House and on a plaque next to Phil Blake on a memorial bench. Woody would have liked that …. instead of Woody’s memory fading it will be around for some time. 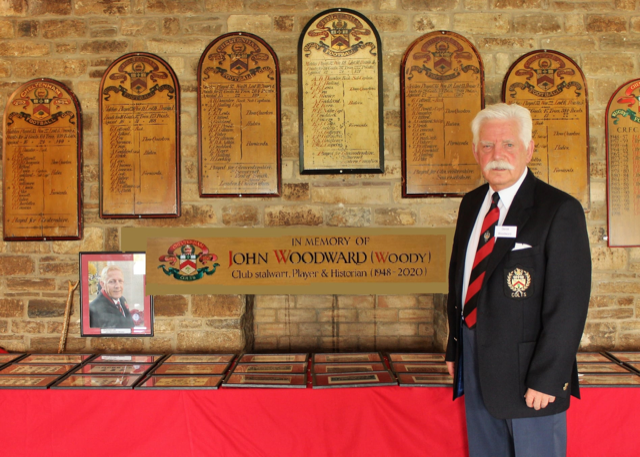 From a very grateful proud family. Thank you.

previous
September Training Schedule
next
Club Pitch Use for September 2021