Cheltenham Rugby Club and my connection.

My first recollection of rugby was when I was three or four. I was pushed by my mother in a pushchair to watch my brother play rugby on the Grammar School playing field at Brooklyn Road. At that time the playing field was approached via a cinder track on the west side of Brooklyn Road and would have been in the area of what is now Newton Road. The Grammar School was on the High Street. This would have been about 1938. I well remember the event because it started to snow and I was frozen.

My brother, Granville (“Granny”) A.L. Burne, was nine years older than me and went on to play for the Grammar School 1stXV, where he got his cap, the Old Patesians, Aldershot Services, and then Cheltenham. His first game for Cheltenham was on 9th October 1944 and as a consequence went training on the Athletic Ground in Albion Street, now developed as Tom Price Close. The groundsman was Mr Fry and he lived in a house, adjoining the main entrance and changing room, with Mrs Fry, who washed all the jerseys.

I was dragged along as well so at the age of about ten I was ‘training’ with the Town side. I was very privileged to be taken along with my brother on match days and sat on the trainer’s bench in front of the main stand from where I watched all the premier sides in the country, which at that time included most of the London Hospitals, the Metropolitan Police, London Welsh, Scottish, and Irish, Rosslyn Park, Blackheath and all the top clubs. Prominent on the fixture list were teams from the Welsh Valleys, including Cardiff but strangely at that time never Newport. It wasn’t uncommon to see that it was apparent that some of the players from the valleys had come straight off their shift from down the mines

At this time the 1st XV was captained by Wilf Handley, at centre, the diminutive full-back was Don Harvey, also Ron Arnold. Wingers were Mike Moore, Chris Hobson, Bobby Lewis, and Peter Woodruff. Centres were Granny and Wilf, also Stan Walters who also played at full-back. Stan (Dai’s brother and Dave and Ken’s uncle) was very well built and had the most fantastic screw kick punt ever seen.

It should be remembered that in those days the ball was very firm leather, very heavy when wet and most irregular on bouncing, unlike today, and it was essential to catch the ball and not let it bounce.

Points scoring, 3 for a try, another 2 to convert it into a goal, 3 points a penalty, 4 points for a drop goal. I never saw a penalty try and it was a very rare event for anyone to be sent off, possibly only once a season making it a national event. After a try for the conversion attempt usually the scrum-half had to lie down and hold the ball off the ground until the moment before the kicker could kick and the opposing team could then charge at the kicker. The ball could be punted from anywhere straight into touch which could make the game a bit boring. A ‘mark’ could be made direct from a kick from anywhere on the field.

Boots were generally hard leather with a reinforced toe cap, but gradually Elmer Cotton boots became available which were more of a soft leather the toe cap reduced making them lighter. The shorts were Cotton Oxfords and had baggy sides. This made it easier to grab the sides when tackling, undoubtedly the reason they were discontinued.

The training comprised three or four laps of the perimeter of the pitch and sprinting, running and walking between the lines of the length of the pitch, scrum and outside halves would spend time passing at speed, the scrum half would dive horizontally to get the ball away quickly. Forwards would practice jumping in the line out (free for all) and also pack dribbling or forward rushes with the ball at their feet. The fly-halves and full backs would be drawn in to fall on the ball at the forwards’ feet,

Some clubs had the facility of a scrummage machine, but at Cheltenham, the only piece of equipment was a medicine ball, which comprised a large, approximately two-foot diameter, leather ball stuffed with horsehair or some heavy material which was thrown to one another. On one occasion I was used as a medicine ball by Frank Cherrington and Stan Walter, something to do with toughening up (me or them?).

After the games refreshments such as tea, sandwiches, fish and chips, pies, were provided under the main stand where there was a bar. The ceiling was whitewashed concrete sloping in the shape of the stand steps above. Eventually, the Club purchased a house backing onto the ground in St Anne’s Road.

The first team attracted about 3 to 4,000 spectators which could rise to 8,000 against Gloucester. The Second or United team could attract around 1,500. The entrance fee was 1 shilling and 9 pence, 9p in metric and the equivalent of about £3 today.

My first game of rugby was on the Brooklyn Road playing field when I was at Pates Junior School. I was allocated hooker. Naturally, when the ball was put into the scrum I hoofed it, hitting my opponent doing grievous hurt resulting in him being taken off and me banished to full back, where it was thought I could do no more harm.

After Pates Junior, I went to The Central/Technical High School, where they only played soccer and for the benefit of the school, I played soccer for the Cheltenham Schoolboys with a trial for the County. In order to get my rugby, I played for the Old Patesian Colts, which was run and organised by Geoff Colville, one of those unsung heroes who flogged around on bicycles (nobody had telephones) getting players for junior teams. I was about four years younger than those I was playing with which stood me to great advantage.

In 1947, when the war was over servicemen were being demobbed and Herbie Simmonds became my sports master. He was a contemporary at school and a friend of my brother, whom I had previously known as Herbie but now had to call him ‘Sir’.

Herbie played for Cheltenham and was a former England Schoolboy International. This was fortuitous for me because he organised that I could have a trial and go over to Gloucester and play for the Gloucester and District Schoolboys. Sadly, there was no one else from Cheltenham, from where I was still training at the Athletic Ground, along with Ken and David Walters, John Hicks, Keith Wilkins and a few others from time to time. Don Harvey and Bob Adams were particularly helpful.

On the Gloucester District side, I was a year younger than the others which was of terrific benefit because when the next season came I was well established.

Eventually, I had a trial for Gloucestershire County Schoolboys, then for the Southern Counties, eventually a trial for the England Schoolboys at Ilford Road, Oxford.

Initially, I had played mainly at full-back, occasionally on the wing for the District side, then selected at outside half, then centre and eventually selected for the England Schools at fullback where I was selected for both of the two only games, both against Wales, one at Cardiff Arms Park and the other at Welford Road, Leicester. We lost both games but what an experience. 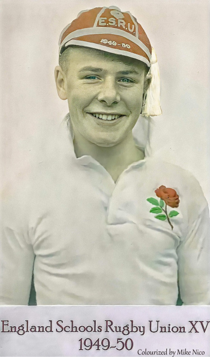 When playing for England Schoolboys at the Arms Park in March 1950, Cardiff came up to play against Cheltenham on the Athletic Ground when my brother was playing, which I seem to recall Cheltenham won 6-3. At that time Cardiff were by far the best team in the British Isles. To celebrate the visit the club had hired the Cadena in the Promenade for the evening meal and dance evening. This match was the great Cliff Morgan’s first game for the Cardiff 1st XV, he was only sixteen. I had been invited to attend if I got back from the Arms Park early enough, which I did. Being on the younger side Morgan and I were given a couple of shandies and told to sit on the side and be quiet, so I spent quite a long time chatting to him about rugby. The Cardiff team had a number of internationals playing for them, Bill Tamplin being one. He had a particularly flat top to his head and was accomplished at singing the ‘Barley Mow’ and dancing with a pint of beer on the top of his head, leaving any foolish competitor soaked.

After leaving school I played for the Old Patesians for possibly three or four seasons.

I then had to do my two years of National Service, ending up in a Survey Regiment of the Royal Artillery, at Salisbury. The 2i/c, Major George, was absolutely mad on rugby and this was the first time that I was able to study the game with meetings at HQ offices on tactics. I played for the Regiment during the week and at mid-day on a Saturday used to hair home to Cheltenham on my motorbike to play. It was at this time that I moved over to play for the United.

I really cannot remember my first game with the 1st XV but I certainly did not gain a regular place. The transition from 2nd to 1st seemed so easy. All I know is that I had some terrific times both home, away and on tour.

It is obviously impossible to name all those that I have played with and been in contact with and who have helped me.

Apart from the players, there were those who worked really hard. Dumps Elliot, the ‘baggage man’. Jim Thomas assisted Dumps and was a physio’, George, the St John Ambulance man, who suffered from cerebral palsy, Dai Walters, team secretary, who were always there come hell or high water.

After regretfully ending my days with the Town I went back to the Old Pats, captaining them for one season. At this time in November 1963, together with Barrie Lewis and Pat Newstead, I was on the Committee to set up the District Combination. It was my intention that like many other teams the Town should encourage local area players to improve their rugby by playing a higher standard of rugby with the Town. I think this worked quite successfully.

I understand that prior to WWll the Club could have bought the ground in Albion Street for £250., but that they were unable to raise the money. In the event, the ground was purchased by Cheltenham Borough Council and turned into the Athletic Ground. I do not know the terms of the rugby club’s tenure, however, it was an excellent move to purchase the house in St Anne’s Road immediately adjoining the ground as a clubhouse, I believe for £4,000.

I left Cheltenham for work purposes in 1967 and lost contact with the Club but could never understand what possessed the Committee to sell the Club House, an appreciating asset, for I believe the same sort figure for which it was bought to buy a terrapin hut, a depreciating asset, and put it on a short leasehold basis on the Athletic Ground. 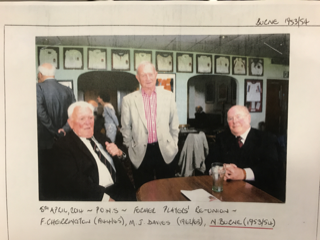 I have seen the game change from a strictly amateur game to a professional one and I would certainly never have wished to be paid for playing. I always wanted Cheltenham to be a first-class successful Club and am pleased that it is now on a substantial footing and giving as much enjoyment as I had from it.